Shock and Sadness: Hearing The Unspeakable 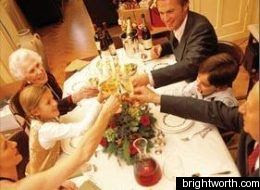 I listened to a woman in her early 50s across the table mock Obama as "The One" and "The Messiah" and scorn his policy for spreading the wealth. Then she dropped this bomb: "You know if I ever opened the newspaper and read headlines that something tragic had befallen Barack Obama, I tell you I wouldn't shed a tear."

My spoon froze on its way to my mouth. I heard our host, a Republican, shout at the woman, his sister. "How can you say that? That is beyond the pale. That is simply beyond the pale!"

There was much more screeching and protesting, but the woman repeated her explosive comment once again, justifying her horrid thought with: "I'm just being honest."

I must sadly assure you that I have heard as bad, or worse, from casual acquaintances as well as from people I am otherwise proud to consider friends.

However, as a semi-conservative-libertarian in an overwhelmingly majority Democrat area (Atlanta), I usually hear such hatefulness expressed in the other political direction.

In your situation, I would draw some hope from the fact that the host took his sister to task for her comment. And, if I understand you correctly, several others at the table, conservatives all, spoke up in objection. I can't deny that her like exists, just as I have experienced her opposite number on the left, but let us be aware, and thankful, that they occupy the fringe, not the mainstream of their respective points of view.

About Barack Obama
Read the Article at HuffingtonPost
Posted by Daniel at 6:47 PM No comments:

Obama and McCain - Dance Off!

Spotted at Dark Roasted Blend.
Posted by Daniel at 10:40 AM No comments:

I’m deeply ashamed right now to be called a “journalist”

Editing Their Way to Oblivion:
Journalism Sacrificed For Power and Pensions

Now, don’t get me wrong. I’m not one of those people who think the media has been too hard on, say, Gov. Palin, by rushing reportorial SWAT teams to Alaska to rifle through her garbage. This is the Big Leagues, and if she wants to suit up and take the field, then Gov. Palin better be ready to play...

No, what I object to (and I think most other Americans do as well) is the lack of equivalent hardball coverage of the other side - or worse, actively serving as attack dogs for Senators Obama and Biden. If the current polls are correct, we are about to elect as President of the United States a man who is essentially a cipher, who has left almost no paper trail, seems to have few friends (that at least will talk) and has entire years missing out of his biography. That isn’t Sen. Obama’s fault: his job is to put his best face forward. No, it is the traditional media’s fault, for it alone (unlike the alternative media) has had the resources to cover this story properly, and has systematically refused to do so.

Why, for example to quote McCain’s lawyer, haven’t we seen an interview with Sen. Obama’s grad school drug dealer - when we know all about Mrs. McCain’s addiction? Are Bill Ayers and Tony Rezko that hard to interview? All those phony voter registrations that hard to scrutinize? And why are Senator Biden’s endless gaffes almost always covered up, or rationalized, by the traditional media?

Posted by Daniel at 2:36 PM No comments:

There is only one debate scheduled for the "third-party candidates" and it's tonight at 9pm at the Mayflower Renaissance Hotel in Washington.

I wish I had a handful of worthwhile prizes I could give away. I would walk the street asking people to name four people running for president in 2008, and watch their eyes go blank. I'm guessing a lot of people would misunderstand the question and say "Obama, Biden, McCain and Palin."

There are, in fact, six people running for president, and four of them were invited to tonight's debate. Two of them, Ralph Nader (independent) and Chuck Baldwin (Constitution Party), have agreed to appear. Bob Barr (Libertarian Party) has a scheduling conflict, and Cynthia McKinney (Green Party) hasn't replied.

The debate will be carried on C-SPAN. If they were all there, for sure I'd watch it.
Posted by Daniel at 8:03 PM No comments:

Old news by now. Hefti was one of those musicians who, through luck or sheer talent (most likely the latter), created the soundtrack of life itself. The obits all mention "The Odd Couple" and "Batman", but here's a clip of Lionel Hampton performing Hefti's "Cute". I've heard the song a hundred times but never knew the name, nor knew that it has lyrics at all.

Saw it at Mark Evanier's News From Me.
Posted by Daniel at 11:43 AM No comments:

Email ThisBlogThis!Share to TwitterShare to FacebookShare to Pinterest
Labels: music

This campaign needs some intentional humor

Senator McCain and Senator Obama both appeared at last night's Alfred E. Smith Memorial Dinner in New York. They took the opportunity to let their metaphorical hair down.

Senator McCain, part 1:
"It's gonna be a long, long night at MSNBC if I manage to pull this thing off. I understand that Keith Olbermann has ordered up his very own 'Mission Accomplished' banner."

Senator McCain, part 2:
"Seriously, Chris, if they need any decorating advice on that banner, ask Keith to call me so I can tell him right where to put it."

Senator Obama, part 1:
"What you may not know is that 'Barack' is actually Swahili for 'That One'..."

Senator Obama, part 2:
"...and I got my middle name from somebody who obviously didn't think I'd ever run for President."

Saw it at Random Good Stuff.
Posted by Daniel at 11:41 AM No comments:

If you're not familiar with it, tilt-shift is a selective-focus photographic technique whereby a real city / beach / landscape can be made to look like an incredibly-detailed miniature.


Beached from Keith Loutit on Vimeo.

Found at Iheartchaos.
Posted by Daniel at 1:25 PM 1 comment:

Try this at home