Posted by Daniel at 9:02 PM No comments:

What kind of mirror is this?

Oh, no, not another conspiracy 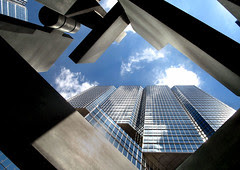 modern perspective Originally uploaded by Mr. Mark
Yes, I saw that a goodly fraction of the blogosphere has leapt upon this report from Politico:

As I say, I saw that report. I've seen an ever-increasing number of bloggers spreading the word.

I've even read Ezra Klein's description of what JournoList is. He's the founder and organizer, if that's not too strong a word to use for a listserv mailing list. (In my own experience moderating mailing lists, I "organize" them only in the sense that the person who cleans out a litter box "organizes" it.)

Having read and digested this...Well, actually, I'm thinking I shouldn't use the word "digested" so soon after talking about a litter box. But I believe I've arrived at a reasoned, reasonable reaction: So what?

The idea, then as now, was to foster a safe space where policy experts, academics, and journalists could freely talk through issues, bringing up the questions they considered urgent and the information they thought important, with the result being a more informed commentariat. It's been of immense value to me, and through that, of value to my readers.

As for sinister implications, is it "secret?" No. Is it off-the-record? Yes. The point is to create a space where experts feel comfortable offering informal analysis and testing out ideas.

This all sounds eminently reasonable. It's the 21st century equivalent of going out to the corner bar after work, granted more importance than it deserves because it's On The Internet.

(Oh: The photo has nothing to do with this story. I just thought it was purty.)
Posted by Daniel at 2:11 PM No comments:

Our newspapers is still failing 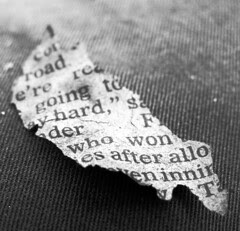 newspaper blackout poem
Originally uploaded by Precious Roy
On March 2, RealClearPolitics ran with its list of the Top Ten newspapers in trouble. By the time the list appeared, one of the newspapers on it, the Rocky Mountain News, was already gone.
This week, Time magazine has weighed in with its Top Ten "tim-berrrrr" list. The odds are pretty good that by the time the next issue hits the stands, one of those will be gone. Let's compare:

Hm. Two lists, twenty slots, but only fourteen newspapers named. It can't have been an easy story to write for either publication: It's not unlike openly speculating which of your aunts and uncles will die first.
I, in my amateur opinion, suspect the next to actually go will be the Seattle Post-Intelligencer, since Hearst is now openly weighing whether to close it outright or go online-only. It can't be a good sign that one of the links on their home page right now is a "tell us about your favorite P-I memories" solicitation. The Detroit News could surprise me and fold tomorrow, or they might be able to hang on for a few more weeks now that they only publish four days a week.
If I were the average big-time blogger, I would be a lot more worried about this than they appear to be. Instead of congratulating myself for being right that Old Media didn't know how to make the transition to New, I would be wondering where the stories I link to tomorrow will come from.
All these newspapers are in trouble because... Well, they each have unique problems, but they all share two really big ones: (1) A whopper of an economic downturn kicked them in the gonads; and (2) they never really believed that the traditional daily newspaper could go away. The Business Insider is onto something when they calculate that for the New York Times, giving each of its subscribers a Kindle would cost half as much as publishing an actual newsprint daily. I'm hoping the all new, online Christian Science Monitor can show everyone how it's done.
C'mon, guys, it ain't whether to go digital, it's when and how. Change or die.
Posted by Daniel at 8:27 PM 2 comments:

Email ThisBlogThis!Share to TwitterShare to FacebookShare to Pinterest
Labels: journalism