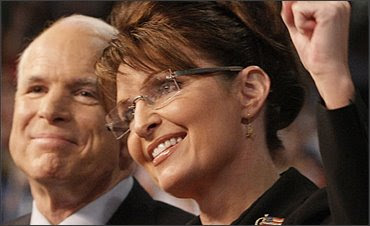 Because it must be said:

Sarah Palin's eyeglasses will not make you look as good as Sarah Palin.

As long as people are going to call it a presidential beauty contest, why not get someone in there with some experience?

That concludes this special report.

Does Editorial Talk to Marketing?

I'm thinking, "no". These are the front and back covers of the new issue of Nature magazine.

The journal swears it is horrified by the coincidence.
"We didn't know until the issue landed on our desks," Nature pleaded to the media.
"It just goes to show that editorial and advertising aren't working in cahoots." 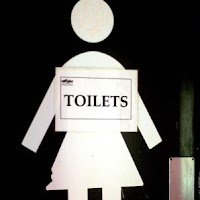 This, as so many Fark entries say, can't end well. Transgendered students at Manchester University don't feel comfortable or safe in either of the rest rooms at the student union.

So the women's officer there has had this brainstorm: Change the signs. Instead of "women" and "men", they now read "toilets" and "toilets with urinals".

Well, that should solve the problem, don't you think? I mean, so long as nobody actually has to change their attitudes, proper signage fixes everything.

(Story from the Manchester Evening News.)
Posted by Daniel at 5:28 PM No comments:

VOTE 4 NOBODY
Originally uploaded by K's Photo's
Georgia just opened the voting offices. We don't have to wait until Nov 2: I could vote today.

I might as well. The election is, in fact, over. Those of you who say you're going to leave the country if McCain wins may as well start packing. McCain WILL win, and the reason why is simply explained.

Similarly, it's the "swing votes" that will decide the election. That's why we hear so much about the "battleground states." The Republican and Democratic cores are owned votes. (Some might say "bought and paid for".)

That said, which seems more likely: "Republicans for Obama" or "Democrats for McCain"? Which candidate is more likely to convince voters from the other party that he's electable?

Oh, changing the subject: Am I allowed to be amused by NOW's endorsement? Woman on the ticket for the Republicans: You have got to be kidding. Women in both positions on the Green Party ticket: Yeah, there's an association we want the public to make, NOW and Cynthia McKinney. A black man and an old white guy, the demographics that have historically had the least respect for women: There's our men.
Posted by Daniel at 4:07 PM 1 comment:

Traffic Jam in Atlanta, Georgia
Originally uploaded by mattlemmon
Here we find typical Atlantans in their accustomed habitat: Imprisoned in their cars on I-75/I-85 through the center of the city. Oh, isn't that cute: The lady in the back of the bus just mooned me for making fun of her. YOU TOO, LADY!

One lane this side of the bus, you might see the double white line that marks the HOV (high occupancy vehicle) lane. The idea was, of course, that by reserving one lane for buses and carpoolers, it would encourage more commuters to ride the bus or carpool. Whether this has worked depends on who you ask. As I look at this photograph, the HOV lane looks pretty much full to capacity. The DOT thinks it hasn't worked. Who are you going to believe, the DOT or your lying eyes?

"If we can't convince people to earn the privilege of using these lanes," they must have said to themselves, "maybe we can make them pay to use them." They want to convert the HOV lanes to TOLL lanes: I'm guessing they'll use the same CruiseCard technology that works so well at north Georgia's only (to date) toll booth, on Ga. 400 between Lenox Square and Northside Hospital.

And why did I find this story on the web site of a Chattanooga radio station? I mean, sometimes I joke about Chattanooga being Atlanta's northernmost suburb, but I had no idea they believed it too.
Posted by Daniel at 9:06 PM No comments:

02-04-02 Gun Buyback at Precinct Station,
Detroit, Michigan
Originally uploaded by cm_e
Oh, yes, again. The city of Buffalo has decided that the most effective way to get weapons "off the streets" is to offer to buy them.

Well, no, that's not quite right.

Buffalo’s police commissioner wryly stated that he doesn’t expect many criminals to be lining up outside seven local churches Sept. 27 to turn in their weapons for prepaid cash cards.

“But it’s a beginning,” [Maura] Evans [mother of a teenager killed by a stray gunshot] said of the buyback. “We have to start somewhere, so why not start here. If even one gun is taken of the street, it’s worth it.”

But it's all right, it's not costing the city $50,000. That money comes from assets forfeited through seizures from drug investigations and other crimes. And we all know that never goes wrong.

“If you see a weapon that a loved one has that you know is illegal, Sept. 27 is the day to bring these guns in,” [Mayor Byron W.] Brown said.

So, if your son killed his ho's pimp, turn in his gun. Get a little walking-around money for yourself and ensure the weapon will never show up as evidence in a trial. It's a win-win!

Am I exaggerating? Overreacting? This is a "no questions asked" buyback. None of the 878 weapons they got the last time they did this were ever checked. They might be stolen property. They might be murder weapons. Who knows? You couldn't ask for a better way to dispose of evidence: Sell it back to the police and let them destroy it.

Gun buybacks fail logic in every way conceivable.
Posted by Daniel at 10:14 PM No comments:

Email ThisBlogThis!Share to TwitterShare to FacebookShare to Pinterest
Labels: guns

This promises to be the most entertaining presidential election in, well, ever. It would be even more entertaining if there were an opportunity for Palin and Obama to debate, but I don't see it happening.

"She's not qualified."
"And he is?"
"Alaska's not a real state anyway."
"What state has he managed?"

TampaBay.com | Sarah Palin action figures now on sale (what, no Joe Biden with the kung fu grip?)
It seems that people can't get enough of Sarah Palin. Since the announcement that she was joining the Republican ticket as the vice presidential nominee, there have been magazine covers and appearances with running mate John McCain. Now Hero Builders toymakers are selling a Sarah Palin action figure.

The three dolls, which cost from $27.95-$29.95, feature Palin as an executive in a dark suit; as an action hero a la Lara Croft, in a trench coat, mini skirt and what looks like a gun strapped to her leg; and as a faux-Britney Spears school girl in a low-cut blouse, peekaboo red bra and a plaid mini skirt. Not sure what kind of action they are going for there.

Me neither. I think they had some leftover clothes from High School Slut Skipper to recycle.
Posted by Daniel at 6:22 PM 1 comment: