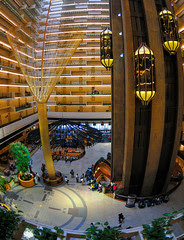 How to deal with vagrants at conventions: As long as you're going to be in downtown Atlanta... On the other hand, anyone who should be traveling unsupervised should already know.

The lunar eclipse is tonight! Well, tomorrow morning in this time zone.

But who owns them? "Mermaids have been performing at Weeki Wachee Springs for 60 years. The water district owns the land that Weeki Wachee Springs sits upon. As for who owns the mermaids, well, that is an interesting setup. There's a private company. But a few years ago its owner simply gave the company to the city of Weeki Wachee. (He got a tax break.) As for the "city," its population usually fluctuates somewhere between five and nine people, consisting of attraction employees." Isn't it enough that they're there?

Newscaster Emily Maitlis offends BBC viewers with flash of leg: No, really. I don't want to hear one more word about sophisticated Europeans smirking at America's puritanical attitudes about sex, you get me? Not one word.

And that's all we need to hear from Michael Vick, too: "Are you entering the plea of guilty to a conspiracy charge because you are in fact guilty?" Vick answered yes.
Posted by Daniel at 10:33 PM 4 comments:

This is to enable mobile blogging from my mobile phone. Be afraid.
Posted by Daniel at 9:59 AM No comments: 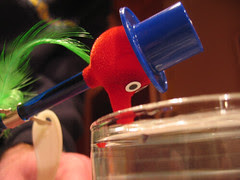 Is This Man Cheating on His Wife?: Ric Hoogestraat sits at his computer with the blinds drawn, smoking a cigarette. While his wife, Sue, watches television in the living room, Mr. Hoogestraat chats online with what appears on the screen to be a tall, slim redhead. He's never met the woman outside of the computer world of Second Life... Their bond is so strong that three months ago, Mr. Hoogestraat asked Janet Spielman, the 38-year-old Canadian woman who controls the redhead, to become his virtual wife.

"What kind of moron would Tase an adult holding a baby?"

Heart attack victim saved by sales pitch: An elderly New Zealand man who suffered a heart attack at a hardware store was revived by a salesman who just happened to be demonstrating a defibrillator to store staff.

Wichita Man Left Stranded at Orlando Airport: A 72 year-old Wichita minister who traveled to Orlando earlier this week was left on a bench inside that city's airport for three days. Nobody realized that Kenneth Davis, the pastor at Wichita's Immanuel Outreach Center had suffered a stroke.

Two friends have dressed as a pantomime horse to climb the tallest mountain in Wales and England.

Toy tune offends mothers: The problem is how the digital voice singing the scale sounds with the combination Fa-Mi-Re-Mi. ..."She's like ‘fa, fa, fa,' and I was wondering why is she saying that?" Alexis Chacon said. "It was the toy. Then she says, ‘ra, ra, ra.' She's too small to learn those kinds of words. It's supposed to be Do-Re-Mi, and it's F-me-rape me." See also Consumerist. You laugh, but when's the last time you saw a toy typewriter?

For those who hoped we'd see "Wash" again: [Alan] Tudyk is a familiar face to sci-fi fans for his role as Hoban "Wash" Washburne on the cult TV series "Firefly" and subsequent feature version, "Serenity." Tudyk has his most screen exposure in "Death at a Funeral": He spends about 90 percent of his screen time totally naked.

Follow-up: The Lush bath-products "Ask Me Why I'm Naked" promotion was actually international in scope, but in Victoria, CA, "only assistant manager Sahra MacLean went au naturel while handing out bars of Buffy Body Butter to slack-jawed tourists, flashing her backside to those who questioned whether she was 'really naked under there.'"

Nude virgins flee sex blaze: A teenage couple having sex for the first time were interrupted when candles set fire to the girl's attic bedroom and forced them to flee naked from her parents' house, German daily Bild reported today. The couple, both 18, were pictured naked in the paper among the burned wreckage of the attic. I'm trying to think of any set of circumstances in which I could believe that it would seem logical for the newspaper to suggest that the "kids" go back into the burned room, naked, to pose for these photographs -- or that the "kids" would say "Sure, let's go."
Posted by Daniel at 2:51 PM 2 comments: 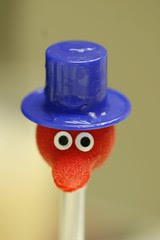 Dippy Bird
Originally uploaded by mrmoorey.
If this isn't a friendly audience, what is? Democratic presidential nominees sway helplessly in the breeze before the combined might of liberal bloggers at the Yearly Kos Convention.

Lookit them wild oats go: One in every 200 men alive today is a relative of Genghis Khan.

So, you're saying men can be librarians?

Do these pants make my butt look big? See for yourself with the dressing room buttcam.

The United Countries of Baseball.

Cinema of the Absurd: Can there ever really be too many films about clowns and gas chambers?

TV Legend Merv Griffin Dead At 82. See also a reminiscence by Mark Evanier for a glimpse of what Griffin was really like. Which is to say, pretty much the person you saw on the air. When being yourself has made you that rich, why bother to pretend?

It's a public library, right? I'm the public, right? Authorities say they have busted a serial book bandit who roamed Front Range libraries checking out thousands of books, tapes and DVDs and then selling many of them online.

Most detailed pictures of Earth ever seen: But, if I go outside with my cel phone and shoot the grass between my feet, won't it be more detailed than this?

Staff wear not enough packaging to protest too much packaging: Male and female staff at Lush in Watford's Harlequin shopping centre [and at Lincolnshire] stripped off to serve the public, wearing nothing but white aprons bearing the slogan "Ask me why I'm naked". The aim of the initiative was to highlight the overuse of packaging in the retail industry and to promote the environment. ("The store's naked campaign was part of a national effort, with similar events happening in 55 cities in the UK." There are stories from Cheltenham, Bristol, Edinburgh, Swindon, Wimbledon (2), Oxford, Bournemouth, and Cambridge.)

How does a Dippy Bird work?
Posted by Daniel at 3:49 PM No comments: 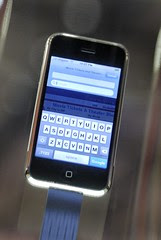 Apple iPhone 23
Originally uploaded by tychay.
Phone scalpers? A half-million iPhones sold in the first two days, but only 146,000 activations? Awfully pricey for a paperweight. "The difference is going to be what was sold on eBay or activations that didn't happen immediately." What a nice way of saying they were bought by speculators who intended to resell them at a profit, rather than activate them.

Only Imperial Stormtroopers are so precise.

Attention Red Shirts: Don't beam down with the Captain. But if you can get him laid, your odds of survival improve.

And while I'm at Wikipedia, here are Wikipedia's Lamest Edit Wars.

How much trouble can you get into for goofing up a class picture?