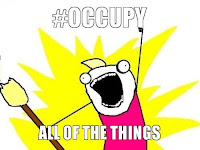 About a dozen protesters put tape across their mouths and tried to enter the [J W Marriott] hotel, intending to walk through the attached Lenox Square shopping mall to Phipps [Plaza, the upscale shopping center that was their planned rendezvous point]. But security guards stopped them and told them the demonstrators would not be allowed in the hotel, as it was private property.
One organizer told [WSB-TV reporter Richard] Elliot that the protesters had not realized the mall was private property.

It's not the "some participants apparently lost their way" that gets me. I've ridden MARTA, I know how easy that is. It's their utter surprise and unpreparedness at learning that Lenox Square is private property. What did they think it was?

And I wonder why they thought going through Lenox Square would get them to Phipps Plaza any quicker than the sidewalk on Lenox Road. The two malls are not connected.

They have no idea of the level of tolerance their Occupation is already receiving. And they've spent so much time talking to each other that they think everyone agrees with them and their methods. These are the people who are going to show the Evil Rich how economy should work?
Posted by Daniel at 9:18 PM 2 comments: