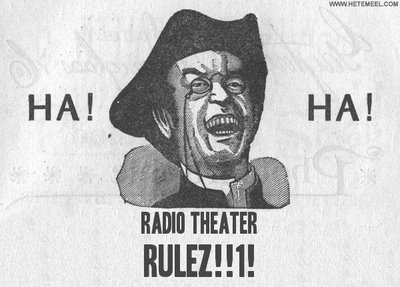 Who were you expecting, Orson Welles?
Posted by Daniel at 12:23 PM No comments:

Nobody likes a sore winner

After spending the last month ramping up a challenge to the accuracy of electronic voting, the left now has nothing to say about it.

"A Loud Message for Bush", says the New York Times, a headline paraphrased by every other major news organization. I think I'd be insulted if I'd just campaigned for, and won, a seat in the gorram House of effing Representatives, only to see every analyst in the country dismiss it as "a message for Bush". It wasn't about anything I'd said or didn't say, or did or didn't do: It's about Bush.

I didn't have an opportunity to send a message to anyone, since my congressman, the hon. John Lewis, ran without opposition from either party, a situation he's enjoyed for as long as I can remember.

(What a coincidence, too, that the NYTimes has made its subscription-only web content freely available this week, doubtless in gleeful anticipation of today's headlines.)

I'm getting pretty far off track. That isn't where I'd meant to go.

Congratulations, Democrats. No, really, sincere congratulations. And best wishes: I don't envy the position in which you've put yourselves. Now that you've made it crystal clear that your plan, your only vision for the future, is a nation without Bush, you have to spend the next two years getting along with him and producing visible results. Blocking the President at every turn isn't going to be enough: You're going to have to actually Do Something eventually.

But that's a thought for the future. Just now, less than a hundred hours after the election, you can get away with Doing Nothing. In fact, Nothing is exactly what you should be seen as doing. The last two Presidential elections have been marred by the embarrassing spectacle of a national Democratic Hissy Fit as you demonstrated just what sore losers you were. Sore winners are even worse. One would think, now that you are flush with victory, you could bring yourselves to simply bask in it for a few hours. Accept it gracefully. Don't keep slamming the other guy: That fight is over. Be magnanimous. Recognize the people who actually did the grunt work in your campaigns. Thank the voters, who gave you a chance to prove you aren't the same jokers they turned out twelve years ago. Use the words "worthy" and "opponent" in the same sentence. You can afford to. You won.

Then, when you do start actually taking action, the one thing you can do that will give you the most credibility in my mind is to actually address the concerns you raised a month ago regarding electronic voting machines. Prove that you actually care about such things even when you win. Money can't buy publicity that good.

Oh, and see if you can rein in Bill Maher*. I thought you were too tolerant and enlightened to think that "outing" gay people was inherently slanderous.

* *rolls eyes* Maher and O'Reilly, two sides of the same coin. Shame we can't pull 'em both off the table and raise television's collective IQ by fifty points.
Posted by Daniel at 11:24 PM No comments: