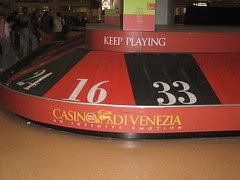 baggage carousel in Venice
Originally uploaded by estee loo.
Get your game face on: "Checking your luggage through to Venice’s Marco Polo Airport is always a bit of a gamble." I'm thinking all baggage carousels should have numbered panels.

Don't make me turn this car around: Now that it's too late for me, Wise Bread offers tips on how to survive a road trip, and Open Travel Info has 29 tips on saving gas.

I can see my house from here: On the other hand, if this had happened to us while we were at the St. Louis Gateway Arch, we would have had a great excuse for calling in sick the next day. "Boss? You'll never guess where I am..."

The Superman Celebration in Metropolis, Illinois.

Another legendary newspaper dies: "American Media has decided to suspend publication of Weekly World News, both the print publication and the web site." Bob Greenberger has more

There's a Way, Said a Wise Old Man: David Wygant of Yahoo Personals offers ten tips to Charm a Woman. (And fifty comments suggest that these tips are, eh, flawed.) The Manchester Evening News reports that women lie, cheat and steal. "The favourite fib told by women was 'Of course you don't look fat'"...but "four out of ten (42%) would lie about contraception in order to get pregnant, in spite of the wishes of their partner".

The State of Sequoyah.

Can't remember where I read this: "According to a survey released Friday, the boom in mobiles and portable devices that store reams of personal information has created a generation incapable of memorizing simple things. A quarter of those polled said they couldn't remember their landline number, while two-thirds couldn't recall the birthdays of more than three friends or family members."

The Foot Mouse (Slipper Mouse) with Programmable Pedal: "It's more than a mouse. It's your stepping-stone to peak performance!"

Oh, and there was some book about a teenage wizard.
Posted by Daniel at 10:38 PM 2 comments:

A Fortnight of News, Weak 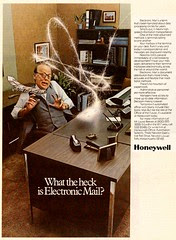 Email in 1977
Originally uploaded by Avi_Abrams.
Started, the Clone Wars have: The first test-tube baby created from an egg matured in the laboratory and then frozen has been born in Canada, in a breakthrough offering hope to women with cancer and others unsuited to normal IVF treatment. The baby is doing well and another three women are pregnant by the same method, researchers told a medical meeting in Lyon, France, on Monday.

The Evil Prairie Dog: I cannot tell you why this five-second YouTube video is funny. But I have watched it a dozen times and, to quote BeetleJuice, "It keeps getting funnier every time I see it." (if you can't stand it any more, here is the original source.)

Actually, there's one born every 0.3456 seconds: A half-million iPhones were sold the first weekend.

So who's looking at her lips?: Nina Conti is not just another pretty female ventriloquist. (Her father is Tom Conti, who appeared in, I think, every third movie filmed in the eighties.)

Next they'll be telling us a two-by-four isn't 2" by 4": Large sub sandwiches are the "must have" food of many super bowl parties. It's a no-brainer right, since most party sub sandwiches are sold in 3 foot sections, that's what you'd expect. But, overall, 7 of the 9 subs measured were short and none were exact.

Well, she apologized, so that makes it all right: Nobel Peace Prize winner Betty Williams apologized Thursday for saying she could kill President Bush, remarks that drew scorn from Bush loyalists and shook up the International Women's Peace Conference in Dallas. Questioned about her speech Thursday morning, Ms. Williams initially denied making the comment but reversed course after organizers confirmed the quote. In a speech before 1,000 people Wednesday, Ms. Williams said that violence is a choice and the push for peace takes hard work and commitment. "Right now, I could kill George Bush," she said. "No, I don't mean that. How could you nonviolently kill somebody? I would love to be able to do that." As she made her point, she chuckled and some members of the audience laughed.

Do libraries cost publishers sales? From If Public Libraries Didn’t Exist, Could You Start One Today? "Among writers, there is a very common lament: someone comes up to you at a book signing and says, 'Oh, I loved your book so much, I got it from the library and then told all my friends to go to the library too!' And the writer thinks, 'Gee, thanks, but why didn’t you buy it?'"
Posted by Daniel at 10:49 PM 3 comments:

Why I haven't been around lately 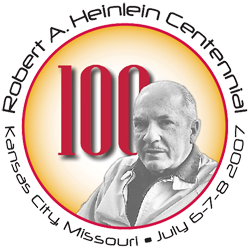 The better part of ten days of my life were consumed preparing for, en route to and from, or attending the Robert A. Heinlein Centennial celebration in Kansas City. (No, smart@$$, he wasn't there.) This process was made more awkward by being under doctor's orders not to lift anything heavier than ten pounds, due to having recently undergone the implantation of an Internal Cardiac Defibrillator.

Oh, fine, thanks. I plan to talk more about this on my LiveJournal page; I just thought you should know.
Posted by Daniel at 9:57 AM 1 comment:

Girls Kissing
Originally uploaded by .Ward.
WBKO, Bowling Green, KY: "A security camera captured two girls kissing... The dean of students said he saw two girls kissing. He checked the surveillance tape then shared what he saw with the parents of one of the girls. They then pulled her out of school, which then pulled the peninsula school district into a big controversy."

Wired Magazine: Despite the Web, Americans Remain Woefully Ill-Informed. "A new study from the Pew Research Center for the People & the Press shows that Americans, on average, are less able to correctly answer questions about current events than they were in 1989." I'd have to see the actual study. I mean, this color-coded graphic is pretty, and the overall trends don't speak well of us, granted. But my eye zips straight to the one anomalous datum, which is unmentioned in the article itself: In 1989 only 14% or respondents could name the Speaker of the House, and in 2007 49% could. Given how often the media bludgeon us with the history-making aspects of the current occupant of that position, I guess the surprise really is that, even so, the number should be bigger.

American Chronicle: "Now here's a pickle of a predicament: I was stark naked at 6:15 in the morning with no house key and standing next to a locked rental in the garage of someone who was 2,000 miles away."

American Journalism Review: What the Mainstream Media Can Learn From Jon Stewart. "The stock-in-trade of 'The Daily Show' is hypocrisy, exposing hypocrisy. And nobody else has the guts to do it. They really know how to crystallize an issue on all sides, see the silliness everywhere." Of course, there's also the fact that Stewart can have his cake and eat it too: Most current students consider what he does to actually be journalism, but when Stewart does get facts wrong, he need only shrug and smirk, "This is a comedy show, what do you expect?"

Canoe: "The 2 1/2-kilometre barrier along the U.S.-Mexico border was designed to keep cars from illegally crossing into the United States. There's just one problem: It was accidentally built on Mexican soil. ...A routine aerial survey in March revealed that the barrier protrudes into Mexico by as much as two metres." Wow. Two whole meters. And we know how much the strict letter of the law matters to our guest workers from Mexico.

Neomeme: Nine Cool Things You Didn’t Know You Could Do With Wikipedia.

C|net News: One company has come up with a way for your new printer to lock-out third-party and remanufactured ink cartridges. Of course, it's intended to put a halt to pirated ink-tank technology, and would never be used to interfere with legitimate recycling business.
Posted by Daniel at 3:33 PM 4 comments: