NY Times | Verizon to Allow Ads on Its Mobile Phones
VERIZON WIRELESS, among the nation’s most widely advertised brands, is poised to become the advertising medium itself.

Beginning early next year, Verizon Wireless will allow placement of banner advertisements on news, weather, sports and other Internet sites that users visit and display on their mobile phones, company executives said.

...“We know we can make significant dollars in mobile Web advertising in 2007,” said John Harrobin, vice president of marketing and digital media for Verizon Wireless. “That said, we likely will not — we want to take it carefully and methodically, and enable the right experience.” More generally, he added, “Mobile advertising is going to take off in 2007.”

Ah. With the magnanimous generosity of the suggestion that they will probably choose not to make as much money with this as they could, they implicitly admit that they know there might be some customer resistance to this tactic.

Allow me to spell it out for all those Verizon managers who are doubtless hanging on my every word:

The first ad I see on my mobile phone will be the last ad I see on my mobile phone. I will stop whatever I'm doing and head directly to my local Verizon store to return my phones and cancel my account. If I have calmed down, I will walk into the store to do this. If I haven't, I'll throw it through your front window. But I will be damned if I will pay you to put an ad in my pocket.

Perhaps you, Verizon management, have forgotten that I already pay you handsomely for the privilege of carrying your phone. I do not browse the web on it. I do not take pictures with it. I do not play games with it. All I do is place and receive calls. Apparently this is too high an expectation for a mobile phone. I have it in order to enable fast, convenient communication with my scattered family. Do that job and no more and you have a customer for life.
Posted by Daniel at 3:24 PM 2 comments:

She tickled me with science

MSNBC | Ha ha ha: Did that make you smile?

If you see two people laughing at a joke you didn’t hear, chances are you will smile anyway — even if you don’t realize it.

According to a new study, laughter truly is contagious: the brain responds to the sound of laughter and preps the muscles in the face to join in the mirth.

Look how clever I am 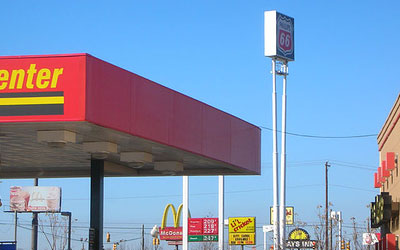 The logos of the fast-food joints on a stretch of desolate American road reveals a kind of species mimicry, or evolutionary convergence:
"...Notice how all of these companies use shades of red and yellow in their logos?"

No fooling. All these companies that want to be noticed on the roadside have signs dominated by colors with contrast against sky blue. Who'da thunk it.

(I'd link to the site from which boingboing got this blinding insight, but it's apparently been overwhelmed by the traffic. As an Olde Farte, allow me to be depressed that this is what fascinates the Generation That Will Shape The Future.)

[LATER: Now the original source, Random Connections is available, having, er, dugg out from underneath its bandwidth-alanche.]
Posted by Daniel at 2:29 PM No comments:

I'm speechless. I can't top the headline I found on this story on Fark, so here it is:

Not news: Due to unforseen circumstances, exclusive Firefly convention is canceled.

(In the world of Fark, this may be news. I can't say it surprises me very much, given the intensity of affection with which a lot of fans regard Firefly. However...)

Hero tag: And so do the actors.

The stories on the forum at Whedonesque are enough to bring tears to my eyes.
Posted by Daniel at 2:05 PM No comments:

I never thought I would see a blog all about buttons, but then came History of the Button.

In this provocative post, our host asks the question, does the elevator user interface need changing? Those who, like me, have waited an hour or more for an elevator going our way at DragonCon might argue that it does. I find myself longing for the days of a human operator who could (a) enforce load limits or (b) keep people from getting on an down-elevator in order to go up. (Aside from the fundamental unfairness of the tactic, it places unnecessary wear and tear on the elevator itself. Or is it not obvious that an elevator that is moving someone in the wrong direction is wasting energy?)

The original "user interface", as I understand it, was a single handle: Moved in one direction, the elevator ascended: In the other, it descended. It was up to the human operator, specially trained for the job, to bring it to a gentle halt with the elevator floor level with that of the desired story of the building.

The problems began when we got rid of that darned operator, put out on the sidewalk to commiserate with the buggy whip manufacturers. The elevator was now controlled by its riders--and a sophisticated set of relays, sensors, and failsafes that (generally) accomplished the task at hand without a human being's constant attention.

Suddenly the question "Is this elevator going up?" was subject to a vote. Every time the door opened. The operator, the final arbiter of the question, was gone--and the elevator itself didn't care. I hope the poor operator at least derived some amusement from the new problems his absence created.

Elevator brains got more and more complex, resulting in a conveyance that would continue rising until it got to the topmost floor to which it was sent (or from which it was called) before it would turn around.

The problem is, the elevator encourages each rider to think only of himself. There's no way to know how many other people want the same floor you do, and nothing to do about it if you did know. With increasingly rare exceptions, there's no way for the average rider to know where the elevator is if he isn't actually on it. PC Tech Support can tell you how long before your call is answered, but nobody can tell you how long before "your" elevator arrives, or how many intermediate stops it will make before it reaches your floor. The user is "protected" from the information he needs to make any kind of intelligent decision regarding the allocation of elevator resources. He's also "protected" from any clues what the elevator system itself is doing, or why.

I'm sure there must have been a few false starts before the familiar elevator interface came together. The rider approaches the lobby and calls an elevator moving in a particular direction, then when one arrives, he gets on and designates his floor. It's a two-step process (unless one happens to be on the topmost or bottommost floor, and so few buildings have their main entrances on either one).

Why should it be two steps?

Back to Bill at the History of the Button, who talks about “destination elevators”. All of the user controls are in each floor's elevator lobby: On the numeric keypad, you tell the system your intended destination floor: It responds by telling you which elevator will go there. There are no buttons in the elevator itself (except, one presumes, the reassuring Emergency Alarm button).

I would love to see a hotel full of science-fiction fans try to cope with elevators like these.
Posted by Daniel at 8:11 PM No comments: