Shoot! Shoot! That octopus is strangling that man

The further you read, the better this story gets.

Bagpipes provoked Olympic alarm
A bagpipe player sparked a security alert at the Olympics - after Chinese police mistook his musical instrument for "some kind of weapon".

The Borders piper was in China to carry out a sponsored walk along the Great Wall to raise funds for the National Deaf Children's Society.

Mr Aitken said: "I'm not all that good on the pipes [how can you tell?] so I thought I'd go off on my own and have a practice before I had to play in front of the people I was doing the walk with.

"I had a silly soldier's hat on and my kilt and a few locals gathered round and seemed to be enjoying me playing, but just as I finished a police car pulled up with four officers.

"They weren't happy and it emerged that it was heightened security all over China because of the opening ceremony."

It took the intervention of a passer-by to explain to police what the bagpipes were.

"It was pure luck that a tourist guide was passing and stopped them from arresting me by explaining what bagpipes were - they thought the pipes were some kind of weapon," said Mr Aitken. [BBC]

They sure aren't a stealth kind of weapon.

You know what "perfect pitch" is to a bagpipe player? Being able to hit the middle of the lake.
Posted by Daniel at 4:29 PM 2 comments:

So, who is it that doesn't know the difference between "making history" and "rewriting history", the Democrats or NPR?

Obama Rewrites History, Clinches Nomination
History was made last night when the Democratic Party nominated Illinois Sen. Barack Obama as its candidate for president of the United States. He's the first African-American presidential nominee of a major party. [NPR]

Glad they put that second sentence in there. Might have missed that point. Wonder why the media have been so reticent about that?

So, what has Senator Obama rewritten, exactly?
Posted by Daniel at 1:37 PM 1 comment:

Gitmo on the Platte

Denver is going to regret hosting the Democratic National Convention--if they don't already, then certainly by the time the convention actually starts.

The owners of Sly's Salon thought it was Just Wrong that local homeless were being given free passes to movies and the local zoo. "It was like, 'What are we going to do with them,' trying to sweep them under the rug." So they organized a cut-a-thon, donating more than a hundred 'cuts and 'dos to folks identified by local homeless-support agencies. Nor did it end there: State Beauty Supply donated bag lunches; other supply houses donated hair-care products.

"It's the heart-felt reward to give to the community and give back," said one recipient. You'll have to explain to me just what the hell that means.

Local hospitals are staffed at large-scale medical crisis levels, to cope with vast numbers of out-of-towners who will most likely be suffering from dehydration and altitude sickness. Most of these people have never been in Denver in August. It's a mile above sea level, and although most healthy people seem to survive it just fine, it does take some getting used to--and if you already suffer from asthma or similar health conditions, it could hit you pretty hard.

And then there's that "secret jail", actually a vacant warehouse temporarily converted to a holding / processing facility by the city department of corrections, in anticipation of the necessity of mass arrests during the convention. They estimate it should allow them to process arrests in one-third of the time it would otherwise require. This seems perfectly logical to me, and I'd be surprised if most cities hosting really large, really public events don't do something similar.

Are they really anticipating mass arrests at the Denver DNC? They'd better be. Recreate 68 is aiming for exactly that. "When things blow up because the police have to enforce a permit that the Democrats got, don’t blame us for that,” said Glenn Spagnuolo, an organizer for the Recreate 68 Alliance. "Blame the Democrats for trying to silence dissent in the city of Denver." Michelle Malkin quotes liberally (you should excuse the expression) from the Rocky Mountain News and the Denver Post.

But surely they deserve the benefit of the doubt. They may have some valid points to... Oh, look, they endorse Cynthia McKinney for President. Never mind. They don't know her like we know her.

All in all, it may be a good week to be on the other end of the continent.
Posted by Daniel at 8:05 PM No comments:

Email ThisBlogThis!Share to TwitterShare to FacebookShare to Pinterest
Labels: meme

Well, he wrote a book (duh), wrote another book (hm), co-invented a couple of trivia games and (like everyone else) has a blog. It was on that blog that he recently noted he'd stumbled upon the perfect summation of public radio in a single sentence. Go, read and be amazed.
Posted by Daniel at 2:13 PM No comments: 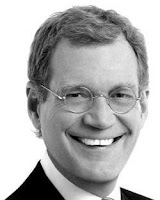 Okay, here's another thing I don't get.

Just yesterday, Mark Evanier linked to a YouTube video--well, seven linked videos, actually, comprising an entire episode of The David Letterman Show from 1980. This is the NBC daytime program that predated his tenure on NBC's Late Night and CBS' The Late Show.

This program usually described, by those few who have seen it, as (at best) the wrong show in the wrong time slot. Some commentaries make that sound like a compliment. Evanier says:

You get the feeling that he doesn't even take his own show seriously so why should you? Plus, he feels all alone out there...no sidekick, no bandleader with whom he has any rapport, etc. Doesn't it feel like half the staff didn't show up for work that day but they made Dave go out and do his show anyway? Add to this the largely non-responsive studio audience...

I admit it. I did not watch this video all the way through. I think Mark would agree that this version of the show really underscores just what Paul Schaffer brings to the show.

Other than Paul, though, this looks like the same show Letterman has been doing all along. It's really amazing how little his essential Dave-ness has changed. A lot of it wasn't all that funny then, and still isn't, really.
Posted by Daniel at 10:59 AM No comments:

Yes, we promised to provide free access to the Internet - except...

The Beijing Olympic Games, I hear, were to be the occasion for China to stride boldly onto the global stage and proclaim themselves to be a major player.

There's a problem with being on the stage: The lights are pretty damn bright. Even an audience who wants to see you succeed can see the theatrical makeup.

China's communist government routinely filters its citizens' access to the Internet, but in the runup to the Olympics Chinese officials and officials with the International Olympic Committee vowed there would be no censorship of the Internet for accredited journalists covering the games.

Some sites were unblocked 10 days ago after reporters arriving to cover the games found them blocked and complained to the IOC, but others remain inaccessible, including sites related to the Tiananmen Square protests, Tibet, Taiwan and the Dalai Lama.

...A statement by Chinese officials indicated they had gone as far as they intend to go.

"As in any other country, there are some kinds of limitations," Wang [Wang Wei, executive vice president of BOCOG, the Olympic organizing committee] added. "However, I think we are going to provide sufficient access for the media to cover the games."

[From AP: Some Web sites remain blocked at Beijing Olympics]
Posted by Daniel at 1:45 PM No comments:

"Wait, that doesn't come out"