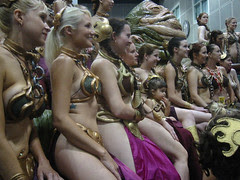 Recursive link: It was too many years ago today...

Update: You can too order a wopburger.

2,000 people, 3,000 cattle and countless birds, wild animals and insects -- in short, every living thing for miles around -- died because the lake farted.

Washington Redskins players Clinton Portis and Chris Samuels defended Michael Vick on Monday by ridiculing the notion that dog fighting is considered a crime... "I don't know if he was fighting dogs or not," Portis said. "But it's his property; it's his dogs. If that's what he wants to do, do it."

"Having [a Visible Panty Line] is unforgivable. It is as bad as picking your nose in public. It is not cute, never has been cute and is a poke in the eye to modern manners."

To promote the upcoming film “Fantastic Four: Rise of the Silver Surfer,” 20th Century Fox and The Franklin Mint altered 40,000 U.S. quarters to feature the character. The U.S. Mint said in a news release Friday that it learned of the promotional quarter this week and advised the studio and The Franklin Mint they were breaking the law. It is illegal to turn a coin into an advertising vehicle, and violators can face a fine.

Dyslexia 'is just a middle-class way to hide stupidity.'
Posted by Daniel at 2:52 PM 2 comments: 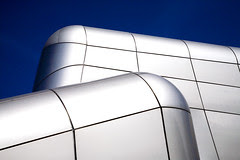 Silver And Blue
Originally uploaded by Rod Monkey.
Fox News says Michael Moore's new film, "Sicko", is "brilliant and uplifting". I don't think anyone has argued that he isn't a talented filmmaker.

Trivia question: Which Presidential candidate's wife has a tongue stud?

B'bye, Cingular; So long, BellSouth. One ring(tone) to rule them all.

Samantha Larson, 18, of Long Beach, successfully reached the top of Mount Everest on May 16. Is she the youngest person ever to have done it? Well, no. But she probably is the youngest non-native-Nepalese to do it. And she is definitely the youngest person to scale the highest peaks on each of the seven continents.

Racism goes on trial again in America's Deep South. Speaking as a native of the official scapegoat region for American Racism (something the rest of the country never lets us forget), I have to challenge the word "again". That would imply that it ever stopped being on trial in America's Deep South. I would submit that much more sensitivity to racial issues is found in the South than the region is given credit for. I would further submit that most other regions, and most especially the regions from which most of our mass media originate, are in deep denial that racism even exists there.

What to say to creationists.

The ten most common passwords, according to PC Magazine. "If you recognize yours, you may as well hand over your wallet or purse to the first person you see on the street." No need to do that, just send it to me.

Only in Florida: A drive-in church.
Posted by Daniel at 9:14 PM 2 comments: 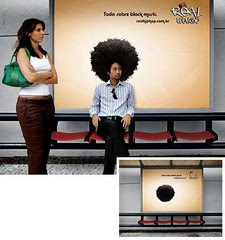 Wig in bus stop
Originally uploaded by 倉促成事.
(Well, I can't call it "Friday Follies" if it isn't Friday.)

Doctors are experimenting with new surgical techniques that allow them to go in through natural openings in the body rather than abdominal incisions. "The idea is part of a broader trend to make surgery less and less invasive. In the late 1980s and early ’90s, surgeons began removing gallbladders with laparoscopic surgery, performed through a few small slits in the belly for a camera and surgical tools instead of the 10-inch incision needed for the original, open operation." (NYTimes story, may require registration.)

"I can't have someone like you here. We might need to part ways," the Christian boss (allegedly) said to the atheist soon-to-be ex-employee.

No good deed goes unpunished: The unintended consequence of increased popularity of fuel-efficient vehicles is that their owners don't pay their "fair share" of gasoline taxes, jeopardizing road maintenance and expansion projects. Oregon has been experimenting with gas pumps that query the vehicle's electronic odometer and calculate taxes based on miles driven instead of gallons purchased.

If the Free Flow of Information Act of 2007 passes, I'll be a journalist! The same federal "shield laws" that protect newspaper reporters will also apply to bloggers.

Sears.com tells you that the item you've ordered for in-store pickup is in stock, whether it is or isn't.

After 88 years on the menu, you can't buy a wopburger in Louisville, CO any more.

Barack Obama, in Kansas City: "The day that this president steps down, the entire world will breathe a sigh of relief." At least he didn't fly to Syria to say it.

And, at the bottom of the news, presenting Britain's, and perhaps the world's, oldest functioning vacuum cleaner.
Posted by Daniel at 11:48 AM No comments:

I can understand why some are upset at the price of gas. After all, we live under a fairly consistent message from Big Media that Big Oil is eeeeevil. The idea that Big Oil always lies while Big Media never does strikes me as amusing.

But what drove me up the wall this time is the following post from Wise Bread, one of several budget-living blogs I enjoy:

What she's upset about is a packet of BP-branded sunflower seeds (for planting, not eating), bearing a drawing of a little girl who wouldn't look out of place in the world of Hello Kitty. What I'm... well, upset is too strong a word, we'll say bemused by, is the fourth tag in her cluster of keywords. It contains a name not otherwise used in the post, nor is the position that person holds referred to at all. The implication is that the current oil prices are so obviously Bush's fault that it requires no explanation at all.

That's a pretty big leap to make from a package of sunflower seeds.

So, of course, I went Googling. Here's what I found:
Ooh. That's too hard to think about. Hey, look, Birkenstocks are on sale!

LATER: Wouldn't want anyone to think I'm ignoring opposing viewpoints. I'm not. Some of the best unintentional comedy is found there. (Same reason I listened to Air America from time to time.) "There is simply no competitive market in this industry." Please, no more, I can't breathe.
Posted by Daniel at 4:08 PM 1 comment: 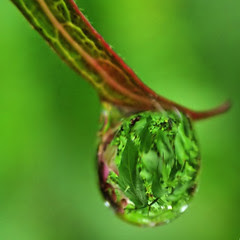 "A Superior Court jury convicted a vegan couple of murder and cruelty to children Wednesday in the death of their 6-week-old, who was fed a diet largely consisting of soy milk and apple juice."

7 World Trade Center in New York has those elevators I mentioned a few weeks ago.

"Unisex lavatories - with blurred glass walls - could help in the battle against school bullies, government guidelines for England suggest."

When one of the world's foremost violinists takes his Stradivarius to the L'Enfant Plaza Metro station in downtown Washington, D.C., and plays his heart out for forty-five minutes, with his violin case open before him with a fistful of change in it... will you stop to listen? (Caution: This story may make you cry.) (I'm thinking the results might have been different if they'd tried it in the afternoon rush instead of the morning rush.)

"In a case that could set a global legal precedent for granting basic rights to apes, animal rights advocates are seeking to get the 26-year-old male chimpanzee legally declared a "person." "
Posted by Daniel at 9:36 PM 1 comment: