There goes the neighborhood -- slowly 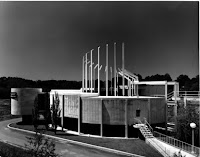 The southside Moreland Avenue corridor -- from I-20 at East Atlanta Village south through Ormewood Park to Thomasville Heights and the Starlight Drive-In -- has been in a steady decline for years. Occasionally, some new development will spring up, almost as a surprise, like the new Kroger and Burger King, or "Moreland Station" at Custer Avenue where the old Kroger was (CVS, Sonic, Aldi, O'Reilly), but generally I've just become accustomed to watching things get older and fall in on themselves.

For instance, after many years of neglect and nominal attempts to attract attention to it, that 1965-futuristic C&S Bank reached the point of no return and was demolished in August. Simple renovation wouldn't have been enough: it would have been impossible to modify the split-level facility to conform to modern handicapped-access standards. And the squatter crack-dealers really needed to be relocated.

Then there were the dueling car-washes. Okay, they really weren't dueling: They weren't both open at the same time. I'm thinking of the corner of Moreland and Confederate, where on the Dekalb County side of the street, a defunct car wash proudly bore a sign proclaiming that it would soon be the home of a new restaurant-and-mixed-use development. Meanwhile, on the Fulton County side, a closed restaurant proclaimed that a spiffy new car wash was coming soon. The idea of a restaurant and car wash going to so much trouble just to swap sides of the street tickled me.

Well, imagine my surprise when the new car wash opened. It's still there, and doing a thriving business. But the old car wash structure still stands and has shown no sign of activity in years (not since the removal of the unnamed restaurant's overly-optimistic opening date). Perhaps, being tied to residential construction, it is a victim of the housing bust.

But then there's the QuikTrip that ain't. Just up the street at Ormewood, There stands an increasingly dilapidated-looking Jiffy Grocery, the owner of which has been trying to make a deal with QT to build a spanking-new combination convenience store and gas station on the site. After months of finagling, tract-redividing and refiling, the project ultimately fell through because city regulations require a 100-foot buffer between private homes and a gas station, and it couldn't be done on that lot. We don't oppose progress, you understand, we just don't want it here.

And now Papa John's is facing the same kind of fight. They want to build between that derelict car wash I was talking about (the one where that new unnamed restaurant was supposed to go) and a Family Dollar. There are indications that the market can bear it: the Pizza Hut next door to the Kroger is always crowded, because they have neither seating nor delivery. You want pizza in Ormewood, you have to go get it. And we do.

But there are ten trees on the lot that would have to come down to make room, and the residents aren't having it. We don't oppose progress, you understand, we just don't want it here. And Papa John's isn't interested in an alternate plan.