When in doubt, kittens

Posted by Daniel at 9:56 PM 2 comments: Links to this post

This is fun! Well done, Neil!


I see "lobotomized monkeys" is on its way to becoming a recurring motif...
Posted by Daniel at 1:08 PM 1 comment: Links to this post

Couldn't let it go, could you? Inaugural Attendees Chant 'Hey, Hey, Goodbye' to Bush Chopper [NewsBusters]
[Article links to video from MSNBC. Below is a reader comment from the same page.]
Libs who keep whining about why conservies aren't accepting Obama, they need to stop and think about this.

After eight years of full-blown hate toward the president, saying he killed black people in New Orleans, accusing Republicans of stealing an election, accusing our military of genocide, making movies that fantacize the president being killed, wishing Dick Cheney had died in Iraq, showing up in Denver screaming "kill Michelle Malkin," hanging Sarah Palin in effigy, throwing projectiles at Ann Coulter, banning the military from public soil, and invading the House to approach Condi Rice with blood on your hands....

All the sudden that's all in the past and we're supposed to be friends.

Excuse us for being a bit skittish, but we have reason to fear the left and have no desire to lump ourselves together.

What's my point? In every aspect of politics -- which is to say, throughout human society -- there will exist people who cannot see that they have become what they profess to hate.

I am encouraged by my inability to find any video of this disgraceful behavior from any source other than MSNBC. I strongly suspect it was a relatively small percentage of attendees who couldn't stop themselves from breaking out in song (and booing the outgoing President when he appeared). But, I mean, good for Chris Mathews and Keith Olbermann for expressing disapproval -- but you still aired it, dudes.

Congratulations and good luck, President Obama.
Thank you, President Bush.
Posted by Daniel at 4:51 PM No comments: Links to this post 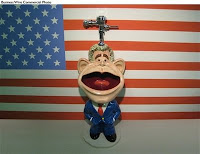 Is it excessively disrespectful to the office to depict the sitting President in this manner?

(Perhaps, given the room in which we might find this if it were functional, "sitting President" might not be my best choice of words.)

I depend on my friends to tell me when I'm mistaken, and I honestly want to know: Have those who disagree politically with the President and the party to which he belongs crossed a line here?
Posted by Daniel at 8:55 PM 2 comments: Links to this post

I was just asking myself...

...whatever happened to Olivia Newton-John?

And presto, hither cometh the Daily Mail to tell me.

Go ahead, click on the picture. The original image is pretty big. There are a few faint laugh lines around her eyes, but all things considered she looks pretty good for being 60 years old.
Posted by Daniel at 9:23 PM No comments: Links to this post

Email ThisBlogThis!Share to TwitterShare to FacebookShare to Pinterest
Labels: trivia

...like I did.
Go to http://obamiconme.pastemagazine.com/ for the simple-as-hope-and-change directions.
I have to admit it is a very striking, one might almost say iconic, representation.

LATER: I think it may take a much more handsome person than me to look good this way.
Posted by Daniel at 8:58 PM No comments: Links to this post